Following on from my analysis of Delius’ first variation on Brigg Fair (which can be found here), I have continued in the same way to analyse the 16 bars of music immediately succeeding it, which make up the second variation. As I included most of the background information to the original melody in my last post, I will move straight onto the analysis, but please do read that post before this one if you haven’t already as I’ll be referring to some harmonic principles explained within in.

The second variation is as follows: 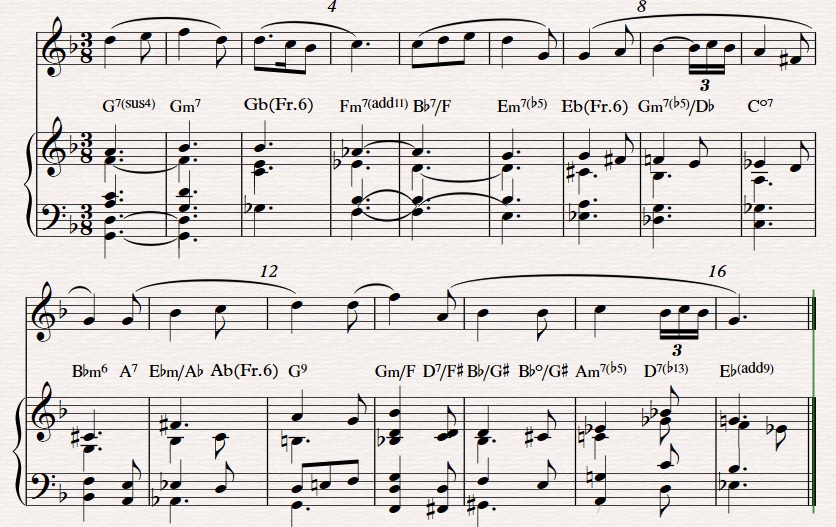 As mentioned in my analysis of the first variation, virtually all of the alterations Delius makes from one variation to the next are harmonic. The one exception to this is the F# in bar 9 of this variation, which is played as an F in all of the others. This is almost imperceptible when listening to the music and is presumably only altered to accommodate for the C diminished chord which underlies it.

The use of chromatic harmony is the most immediately obvious device Delius uses to characterise this variation. In other words, the bass descends chromatically from one chord to the next. This occurs from between bars 2 and 13 of the 16 bar sequence.

From looking at this bass part in isolation, it becomes clear that Delius hasn’t rigidly stuck to the idea of moving down chromatically one chord at a time. The phrase is flowing and musical because of the acceptions to the rule. Apart from the changing harmonic rhythm, chords lasting from between two bars and one quaver long, the phrase is actually not quite chromatic. A D natural has been omitted between bars 7 and 8, as has a B natural between bars 9 and 10, and finally a G flat between bars 12 and 13. To the listener though, these discrepancies in the chromatic line are not really audible, especially as the line continues to descend by step, which is the overriding intention of the passage, whether actually chromatic or not.

Chromatic harmony was not new when Delius used it in Brigg Fair. Examples can be found in a multitude of styles ranging back over the history of music, such as in this passage by Schubert from 1825 (Piano Sonata in A minor, Op. 42, first movement):

Delius used this device in a very idiomatic and somewhat un-technical way however. As mentioned in my analysis of the first variation, Delius seems to have a particular attachment to the French augmented 6th chord. On top of this, slash chords such as the Bb7/F in bar 5 and the Gm7(b5)/Db in bar 8 seem to be particular favourites of his. As far as I can work out, Delius’ approach when using chromatic harmony seems to be reliant on two things; firstly, creating voice leading that is as smooth as possible, and secondly to include as many of the chords just mentioned which Delius puts particular emphasis on in his writing.

As well as the chromaticism of the bass part, two separate chromatic lines are also heard in the inner parts of this passage. First from bars 1-7:

Then, above that, following on from the same place in bar 7 to bar 10:

This use of descending chromaticism (Delius very rarely ascends chromatically) adds to the general sense of falling throughout this passage, an extension far beyond the way in which chromaticism was generally employed before Delius. This approach used by Delius and others was later taken up by other English composers such as York Bowen as can be seen in the following example (Prelude in G minor, op. 102. no. 16):

The influence of Delius is clear in York Bowen’s compositional approach. Not only does the bass descend chromatically but the inner parts follow along the same vein as Delius’, with almost countless instances of chromatic lines being used (I can count at least 5 in these three bars alone).

To try to further understand Delius’ approach I have made an attempt to reharmonize the well known Harold Arlen song ‘Over the Rainbow’ making use of Delius’ chromatic harmony concepts. What I have arrived at is probably closer to the York Bowen example with the harmonic rhythm being generally faster than Delius’, though most of the concepts are the same.

Following on from the chromatic harmony used in Delius’ second variation of Brigg Fair, the bass then briefly ascends during bars 13 – 15 (almost chromatically), after which a more conventional interrupted cadence in G minor is used to end the passage, leaving us back in the key of the original Brigg Fair melody. 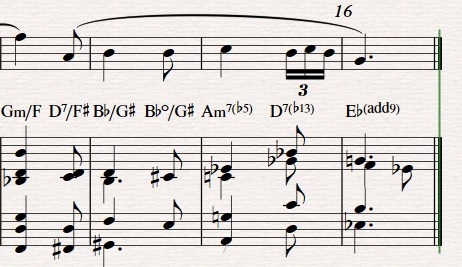 Aside from the chromatic harmony used in this variation, there are also some interesting chords which warrant being looked into in isolation. The first of which is the G7sus4 chord used in bar 1 of the variation. 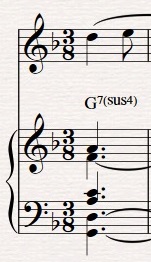 This chord tends to be more associated with a modal Jazz from around 1960 onwards. Sus chords have of course been used for hundreds of years right back to Baroque music, but a chord of this quality being used as a consonance without needing to be resolved was not heard often during Delius’ time.

The other particularly interesting chord is the Fm11 which occurs in bar 4.

This chord is commonly known as a ‘So What’ chord because of its use in the tune of the same name by Miles Davis on his 1959 album ‘Kind of Blue’. What makes this chord particularly interesting is that it is build up of three perfect fourth intervals with a major third on top. This is known as quartal harmony and is generally associated with music much later than Delius. The only other example I can find of this chord before ‘So What’ is in a Poulenc piano piece from 1927, though I’m sure there are other examples dotted around. (Three Novelettes, FP 47, no 1. bars 27 – 29):

Incidentally, if anyone knows of any other examples of this chord being used, please let me know in the comments, as well as any other suggestions or corrections.